Bieber gets busted by cops...again! boys and their toys 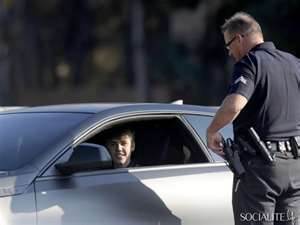 Justin Bieber and Selena Gomez split recently and he was pulled over by cops again in Los Angeles. It seems that not only did his relationship tank, his Ferrari vehicle registration expired as well, as police discovered Tuesday during a routine traffic stop.
TMZ was on-hand to break the story on Nov. 13 report. It seems the paparazzi are always nearby when the pop star gets stopped by L.A.'s finest.
Sources say Bieber was pulled over by cops after they observed him making a "dangerous" left turn in his exotic automobile. Then it gets worse: Bieber's registration to his Ferrari was expired.
Justin's recent traffic stop is another in a string of alleged moving violations. But when you're as large as the "Never Say Never" pop star and drive around in Fisker Karmas and Batmobiles' everyone pays attention.What a two-fer, right? How does a celebrity with boatloads of money and a lot of handlers allow his car registration to go belly-up?
Justin and Selena broke up recently after their fairy tale celebrity relationship came to an abrupt halt.
After being spied out and about with Victoria's Secret supermodels, it doesn't seem as if JB is in mourning over his ex-lover.
When will Justin Bieber get pulled over again? Can you handle curves Boy?
Posted by Unknown at 00:45